We left our hotel room in Tulsa, OK Monday morning at 10am central time.  Although it appeared a few severe storms would fire in western Texas by afternoon, we still had quite stretch to get out there.  We decided this would be another “travel day” and any on-the-go intercepts would be a nice bonus.


As we crossed the Oklahoma/Texas border, we noticed some higher topped cumulus starting to go up in far southwestern Texas which early morning runs of the HRRR and High-Res NAM had hinted at.  It became clear that we’d have a shot to chase these for a few hours before we lost daylight.


Shortly before 6, the prominent cell became tornado warned near Pecos.  We were still a few hours away in Big Spring but continued our race southwest.  When we got to Odessa, we dropped south to Crane before edging west and then southwest towards Imperial.  It was from here that we had a few good looks at the leading edge of the storm. 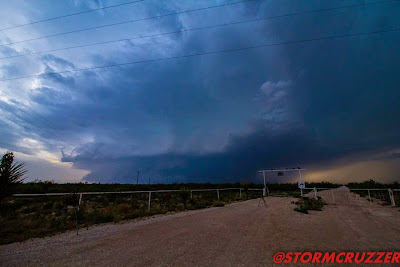 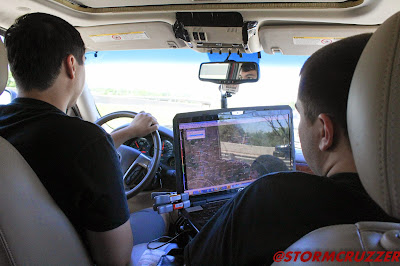 The road network certainly wasn’t the greatest and we were also forced to detour around a construction zone that had stopped traffic.  The storm really slowed due to lack of much midlevel flow allowing us to navigate right around the anvil.  By this time, a few additional thunderstorms began to pop to our south…eventually merging with our cell and forming a bowing segment.  It was here we decided to call it quits and head to find dinner and our hotel for the night in Odessa, Texas.  Fortunately, it looks like we are well positioned for Tuesday meaning we’ll have our first true chase day without much traveling to our target.
After knocking out another 648 miles, we’re pretty pleased with how the day turned out.  It would have been nice to have a bit more time to look into the inflow notch, but also feels good having our first plains super cell (tornado warned at that) under the belt.
Posted by Unknown at 8:21 AM